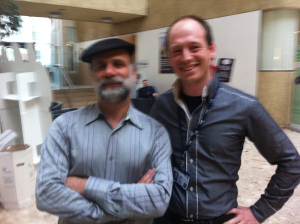 London on a Thursday afternoon. The man sitting a few feet away from me reminds me of that infamous security guru whose work I greatly admire; a man who I’d been reading about for years.

But I hesitate; he seems so normal. No cohort of press, no masses of screaming fans and no burly bodyguards; if I can muster the courage I can simply walk up to him and ask.

In retrospect, that was probably one of the most moronic questions I have ever put forward to anyone ever. But Bruce seemed unfazed. I probably wasn’t the first star-struck geek dazzled by his appearance.

Completely flabbergasted I mumbled something about that I read his blog. He asked if I had also read his latest book. I was ashamed to admit that I had not. Someone took our picture and we shook hands.

He had a pretty firm grip and a mighty powerful handshake; that’s when I was certain that this was the man who already has a backup plan for when a 2nd person discovers that P = NP.